From his birth and early life, throughout his WW1 exploits and into his early political career.

Little is said of Hitler’s earlier years before World War 1 so here it is. He was born in a small village in Austria  on the borders of  Austria and Germany. He was a chorister as a child in the local church and wanted to become a great artist or architect. He followed his dream to Vienna and applied to enrol at the fine arts college there. After being refused entry twice he became a drifter. He became interested in the National Socialist Party in the early years and was keen to fight the Communists trying to take over Germany in the early 1900’s before WW1.

World War I was nearing and he applied to the German Kaiser to join his Private Guard. He then was rewarded for bravery, commissioned to the rank of Corporal and won numerous other medals of valour.

After the War he decided to try to overthrow the Government which was full of Communists. His coup was almost successful but he was over confident and was arrested and was tried for treason which he pleaded guilty to. Treason held the death penalty but he plead his case in the courts and was sentenced to 5 years jail.

In jail he then wrote Mein Kampf, which became a worldwide best-seller far after the War, even though it was banned in most countries. He came out of jail even more popular than before and decided to then go into politics properly.

*Adolf Hitler was the 55th party member and not the seventh.

**The grave of his parents no longer have a monument headstone as it has been removed by officials since this documentary was made.

Hitler goes to prison whilst Germany descends into poverty. The NSDAP rise to power, The Nuremberg Rallies and Germany prospers again.

Part 3 Origins of the NSDAP.

History of the swastika including The Anschluss, more on Hitler’s relationship with Eva Braun, and The Sudeten Conflict.

Germany and the Jews, Crystal Night and the Transfer Agreement between Palestine & Germany, and Benjamin Freedman speech.

The truth behind WW1 and the Treaty of Versailles which was a great injustice ultimately leading to the Allies Declaring WW2.

England and France declare War because of the German-Polish War, meanwhile in Berlin, everyone celebrates a great victory.

The America Racism that has carried on way into the 60’s and Roosevelt’s Fake Neutrality and deception.

This episode is blocked in Germany, and 17 other countries, as is most of the content here.

Please click here to see the films for Germany

War in Europe and the daring Operation Barbarossa, the Push into Russia to cripple Zionist Communism for ever.

Part 9 Betrayal of the Cossacks

After the bloodiest part of WW2 and most likely the darkest hour the Allies would like us to forget. The dishonour and lies that we have been told, and the blood that has been drawn to cover it up.

Helmuth von Pannwitz (14 October 1898 – 16 January 1947) was a German general who distinguished himself as a cavalry officer during the First and the Second World Wars. Later he became Lieutenant General of the Wehrmacht and Supreme Ataman (Leader) of the XV. Kosaken-Kavallerie-Korps. He was executed in Moscow for war crimes in 1947 of which he has been rehabilitated by the military prosecutor in Moscow in April 1996 almost fifty years after his violent death. The revocation of the Red kangaroo court’s conviction of Pannwitz was itself overturned in June 2001. 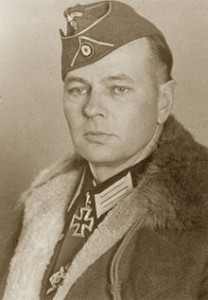 Pannwitz surrendered on May 11, 1945, to British forces near Völkermarkt in Carinthia, Austria, and made every effort to ensure that his men would remain in the custody of the Western powers. But by mid-May it was becoming obvious that the Cossacks would be handed over to their deadly enemies, the SMERSH, an action often referred to as The Betrayal of Cossacks. The same fate overtook the members of the Kazachi Stan at Lienz, another 30,000 old folk, women, and children. All were executed, were sent to GULAG prison camps, or committed suicide to avoid being repatriated.

Pannwitz was a German national, and under the provision of the Geneva Convention not subject to repatriation to the SMERSH. But on May 26, he was deprived of his command and placed under arrest while the forceable loading of the Cossacks into trucks began and continued through the following days.

Although many escaped from their camps following these actions, General von Pannwitz and many of his German officer cadre did not want to leave their men alone and shared the uncertain fate of the Cossacks who had been comrades in combat for more than two years, so these Germans surrendered with the Cossacks to the NKVD at Judenburg and were mostly all killed cold-bloodedly, women and children raped or sent to the Gulag.

Almost fifty years later, on April 23, 1996, during the Russian presidency of Boris Yeltsin, members of the Pannwitz family petitioned for a posthumous verdict of acquittal of the 1946 conviction. The Military High Prosecutor in Moscow subsequently determined that Von Pannwitz was eligible for rehabilitation as a victim of Stalin-era repression.

On June 28, 2001, however, rehabilitation was reversed in a ruling that disputed jurisdiction of the 1996 proceedings, and Von Pannwitz’s conviction for military crimes was maintained. 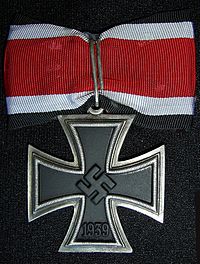 Part 10 The Battle of Stalingrad

The bloodiest so far on the Russian front and the onslaught of German Forces East with Japan in the South East Fighting Communism against China and France and America bring aid to Staling with air drops over Alaska.

This is the turning point in the War for Hitler as his finest Gladiators are wiped out or sent to the Gulag slave camps. Many would freeze to death, and die of disease along the way to the Siberian Gulags.

The last German plane to leave Stalingrad, taking a few wounded also took their last hopes and letters with them, they all in their letters to their loved ones also swore undying allegiance to the Reich and that they would gladly sacrifice their lives for National Socialism and their Führer.

Of the 127,000 soldiers that were captured in Stalingrad only 6,000 would make their way home after the War back to a de-Nazified and destroyed nation.

The Partisans as the Wehrmacht retreat Westward at the Battle of Kursk then the Bloodiest Massacre at Kathyn and the cover-ups.

The daring Prison Break by the most Dangerous man in Europe Otto Skorzeny code-named ‘Operation Oak’. Hitler chooses 3 Men to free Mussolini with an 85% chance of a failure and fatal death they pull it off in under 12 minutes with no shot fired.

Also Operation Gomorrah, the Bombing of Hamburg where the Americans would bomb strategic installations, railways, business’s during the day, and then at night the british would bomb the tightly knitted residential homes.

The attack during the last week of July, 1943, created one of the largest firestorms raised by the RAF and USAAF in World War II, killing 42,600 civilians and wounding 37,000 in Hamburg and practically destroying the entire city.

This would be known as Germany’s Hiroshima. 1 Million refugees were forced to leave their homes because the city had been demolished. The allies had hoped this would break the Germans and they would be forced to rebel against their Führer, but it had the opposite effect.

This episode shows the hidden web of money and lies and the Billions of Dollars the Americans invested into the Rise of Communism.

Part 14 General Leon DeGrelle: The most famous of the Waffen SS

“My Honour is My Loyalty”

Born in Belgium he joined the Waffen SS as a Private and earned all Stripes up to General for exceptional bravery in combat. He earned all stripes from Corporal to General,  and died at 87 years of age.

He was awarded the Ritterkreuz, the Oak-Leaves, the Golden German Cross and numerous other decorations for outstanding valour under enemy fire.

The Waffen SS was the most advanced Army the World had seen, with Soldiers immaculately well trained and equipped with the latest in wartime technology.

The Waffen SS was the most multi-cultural army in the World with recruits from all over Europe, including a Free British Corps and Volunteers across the British Empire. Africans, Muslims.

The Waffen SS  held their oath of honour as sacred.

“I swear to thee Adolf Hitler as Führer and Chancellor of the German Reich loyalty and bravery. I vow to thee and to the superiors whom thou shall appoint obedience until death so help me God.”

Leon DeGrelle was one of the last to fight on the Eastern Front, and was engaged in seventy-five hand-to-hand combat actions and was wounded numerous occasions.

He escaped unconditional surrender by flying some 1500 miles across Europe, managing to survive constant fire along the way and crash landed in San Sebastian in Spain, critically wounded again.

Against all odds, he survived and lived out the rest of his life in Spain where he eventually died at the age of 87.

Part 15 Battle of the Bulge

The Battle of the Bulge nearly turned the War on it’s head; the march through Moscow to the Gulag; and one man’s heroic escape home to his family.

The Treachery and the Bombing of Civilians by the Americans and British; Stalin slaughtering millions upon millions of Russians and Germans.

Churchill stood by and funded Stalin as he slaughtered his way West with some of the most atrocious war crimes that have never been addressed to date. All financed by the British and American Zionists. The destruction of Berlin and blanket bombing of women and children. Anyone left alive was raped to death and hanged, old or young, it didn’t matter.

Roosevelt dies and does not see the end of the War and Harry Truman enters the game. That same month Italian Partisans capture Mussolini and his lover Clara Petacci along with several comrades in northern Italy. They will all be executed after a sweeping trial.

It is believed before they shot Mussolini that he was sodomized, beaten and tortured whilst Claretta Petacchi was beaten and raped several times. Their bodies will be brought to Milan the next day where before being hanged upside down in a heinous public display, a baying crowd will stamp, spit and urinate on them.

When Hitler receives this news, he is already bunkered down in Berlin since January 16 1945 and surrounded by his high command.

Battle of Berlin and the death of Adolf Hitler; The Russians are bombarding Berlin from the East; in the West the Allies pushing hard; Berlin falls.

The horrific deaths of Joseph & Magda Goebbels, Operation Slaughterhouse, and the Allied mistreatment of German prisoners.

The De-Nazification and ethnic cleansing of the Germans, whilst in Asia, the War continues with Japan.

The London Cage, a series of nine cages in Britain where the torture of Germans took place.

David Cole, The History of the Six Million.

Return of the German POW’s, The Rise and Fall of the Berlin Wall, The Great Allied “East German” Deception.

Part 24 What If Germany Had Won?

Hitler’s economic miracle – The Media Revenge – And What if? What if Germany had actually won and Utopia had lost?

Part 25 We Defeated The Wrong Enemy

Operation Thunder, fighting to save Europe, the Charlemagne Waffen SS and Hitler’s Lament.

Adolf Hitler was a man of high morals and proved it by cleaning up the depraved streets of the Marxist cesspit otherwise known as Berlin.